by Elizabeth A. Duke 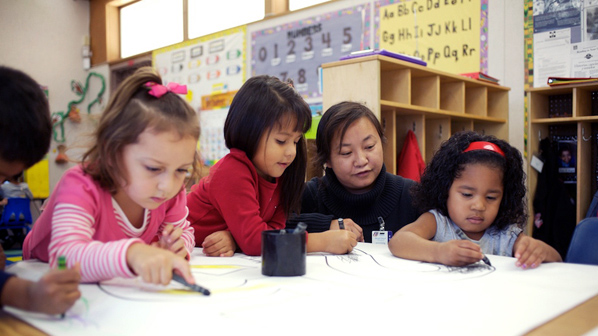 At one time, policy discussions revolved around whether community development was about people or places. I would argue that the debate is over and both sides won. Successful community development is based on attention to both the physical infrastructure, whether housing or commercial spaces, and the health and welfare of the residents therein. Safe and affordable housing will always be an important concern for lower-income Americans, but the recent recession and resulting damage to communities across the country make it clear that communities are more than physical structures. Sustainable communities—those that can weather economic downturns—not only provide decent housing, but also have the resources to support individuals and families and to create a dynamic business environment. For this reason, community development today is a multidisciplinary exercise that challenges us to think holistically about how housing relates to jobs, educational opportunities, transportation, health care, and other services and amenities.

The foreclosure crisis that resulted from unsustainable subprime lending has persisted largely because of high unemployment rates. Thus, in order to be successful, any effort to stabilize and revitalize lower-income neighborhoods will need to consider housing through the lens of access to jobs and educational opportunities. The Federal Reserve System currently has an initiative underway to better understand the relationship between community development activities and successful workforce development strategies. We anticipate that this research will provide valuable information for bankers and their community partners as they address the needs of their communities.

Of course, having a job is one thing. Getting to it is another. With good reason, transportation considerations have become more common in community development plans in recent years. More communities are taking public transportation into account when planning residential projects. Given the high cost of owning and operating a car, transportation options are a significant factor in a neighborhood’s overall affordability. Demographic shifts over the last decade have resulted in the suburbanization of poverty, and now dictate that communities work together to create transportation options, including buses, light rail, and even car-sharing arrangements.

Even so, as the Federal Reserve Bank of Richmond has discovered in its work on car ownership for low-income workers, public transportation is not always sufficient to solve the transportation problems of the poor. Some jobs, such as construction work, require that workers report to different locations. Shift workers, whether security guards, airport baggage handlers, or hospital workers, may not have easy access to public transportation at night.

One of the more innovative solutions to this issue that I have seen was developed by an organization in Dallas that aims to move the jobs to the workers, rather than vice versa. Lone Star Investment Advisors LLC is a private equity fund that invests in Texas companies located in, or willing to move to, low-income census tracts. The fund’s managers have focused on manufacturing and distribution companies that can create jobs in the state’s lower-income communities. One of the businesses in the fund’s portfolio, PrimeSource Food Service Equipment, moved from an affluent northern Dallas suburb to South Dallas, where the poverty rate was higher than 40 percent, relocating more than 100 employees and hiring new employees from South Dallas. I raise this example because it demonstrates what a little imagination can do to solve the problem of connecting people with jobs. Moreover, this double bottom-line approach to investments—making a profit while benefitting the community—makes this kind of activity attractive to bankers with Community Reinvestment Act (CRA) obligations and other socially-minded investors.

Successful community development is an entrepreneurial enterprise. Thinking about community development this way reminds me of a presentation made at a recent Federal Reserve research conference on small business and entrepreneurship.2 Amy Wilkinson, Senior Fellow at Harvard’s Kennedy School Center for Business and Government, has conducted research to identify the skill sets of high-impact entrepreneurs and small business leaders. The skills she identified are, not surprisingly, applicable to community development. They include being able to spot opportunities that others don’t see, managing complexity, reiterating ideas and revamping plans repeatedly, experimenting and failing wisely, networking to create solutions, and, as Amy put it, “unleashing generosity” in ways that create reciprocity within the network.

No doubt these sound familiar. Community development is an ongoing process of identifying and understanding the complicated interaction of people and places. Solutions are found through the cycle of experimentation and adjustment. Successes look easy but they mask hard work and, often, failed attempts. Transformational changes in communities rarely happen without the involvement and support of a network that includes residents, business owners, community organizations, financial institutions, and local government. Sustained interaction among these stakeholders is what makes the opportunity known and the solution successful.

The city of Rochester, New York, put these principles to work and managed to weather the bankruptcy of the city’s largest employer. Eastman Kodak once employed some 61,000 Rochester residents and invested significantly in the city’s educational and cultural institutions; three decades later, it employs fewer than 7,000 people and recently filed for bankruptcy protection.3 This is not an uncommon story, except for the fact that Rochester managed to gain a net of 90,000 jobs during the three decades of employment decline at Kodak.

How did Rochester manage this transition so successfully? The city recognized early on the need to diversify its economic base and, some 20 years ago, created a network of private and nonprofit partnerships to leverage the city’s assets, the same universities and cultural institutions Kodak had supported. Together with local government, this network trained entrepreneurs and supported new business ventures, many of which are in optics and photonics. Through foresight and the collaboration of government, private and nonprofit partners, and committed citizens, Rochester was able to build on the Kodak legacy, effectively turning lost jobs at Kodak into new local opportunities.

In addition to housing and employment, residents need communities that support their health and well-being in a variety of ways. Community developers play a critical role in supporting healthy lifestyles by planning for sidewalks, parks, and other open spaces connecting housing and commercial areas in ways that also provide places for people to meet and children to play. Renovation and new construction plans increasingly adhere to standards that incorporate “green” materials and technologies not only because they lower utility costs, which is important, but also because they improve health results, such as asthma rates, among residents.

One of the most obvious ways to support healthy lifestyles in lower-income neighborhoods is by making healthy food accessible. In the face of increasing rates of obesity, low-income neighborhoods are notably underserved by grocery stores. This is beginning to change because of programs like The Pennsylvania Fresh Food Financing Initiative, which is supported by a partnership between The Reinvestment Fund, a nonprofit developer, and two community organizations, The Food Trust and the Greater Philadelphia Urban Affairs Coalition. This partnership stepped in to fill a financing need where infrastructure costs were not met by conventional financial institutions. Their original objective was to make fresh food available in low-income neighborhoods. But they have achieved much more. The grocery stores the partnership helped to establish create an anchor for other retail needs in the area. Moreover, the stores hire local workers and train them in both the required job skills and in the workplace etiquette necessary to succeed in any job. One of the original groceries financed under the program has also added in-store financial services and a health clinic. As this grocery operator discovered, access to health care is another critical need in many low-income communities.

In Chicago, residents have taken it upon themselves to fill the need for primary and specialty health care by establishing the Lawndale Christian Health Center. Ownership in the Center is retained by residents to ensure that it continues to meet the needs of its neighborhood. In another example of a community facility meeting more than one need, the Center has expanded over time to provide leadership development and organizational capacity building services to its members in addition to health services.

I could go on to recite more examples of programs that respond to community needs, but I think you get my point: Taking an entrepreneurial approach to community development results in innovative and effective programs, making communities more desirable places to live and more resilient in hard times. The CRA regulations encourage banks and thrifts to invest in activities that provide affordable housing or financial services for individuals, promote economic development, or revitalize or stabilize low- or moderate-income areas.

At a time when the needs of these communities are so great and the resources available to meet those needs are so scarce, it behooves financial institutions to think broadly about their CRA obligations. By partnering with other community stakeholders, these institutions can help address existing community needs and lay the groundwork for stronger credit demand in the future.

I don’t want to underestimate the difficulty of the task. The recession damaged communities of all types, but particularly lower-income neighborhoods, and economic recovery has been stubbornly slow. Nonetheless, the commitment and innovation demonstrated in communities all across the country is encouraging. Taking an entrepreneurial approach to community development and thinking about the needs of both people and places will, I believe, make for stronger, more resilient communities in the future.

About Elizabeth A. Duke