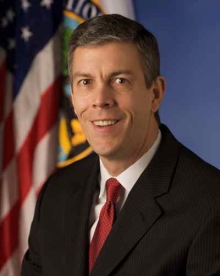 Arne Duncan is the 9th U.S. Secretary of Education. He has served in this post since his confirmation by the U.S. Senate on Jan. 20, 2009, following his nomination by President Barack Obama. Secretary Duncan’s tenure as secretary has been marked by a number of significant accomplishments on behalf of American students and teachers. He helped to secure congressional support for President Obama’s investments in education, including the American Recovery and Reinvestment Act’s $100 billion to fund 355,000 education jobs, increases in Pell grants, reform efforts such as Race to the Top and Investing in Innovation, and interventions in low-performing schools. Additionally, he has helped secure another $10 billion to support 65,000 additional education jobs; the elimination of student loan subsidies to banks; and an over $630 million national competition for early learning programs. Before becoming Secretary of Education, Secretary Duncan served as the chief executive officer of the Chicago Public Schools (CPS), a position he held from June 2001 through December 2008. Prior to joining the Chicago Public Schools, from 1992 to 1998, Secretary Duncan ran the nonprofit education foundation Ariel Education Initiative, which helped fund a college education for a class of inner-city children under the I Have A Dream program. He was part of a team that later started a new public elementary school built around a financial literacy curriculum, the Ariel Community Academy, which today ranks among the top elementary schools in Chicago. From 1987 to 1991, Duncan played professional basketball in Australia, where he also worked with children who were wards of the state. Secretary Duncan graduated magna cum laude from Harvard University in 1987, after majoring in sociology. He was co-captain of Harvard’s basketball team and was named a first team Academic All-American. Secretary Duncan is married to Karen Duncan, and they have two children who attend public school in Arlington, VA.