We can say with growing certainty that the economy is in recovery. Unemployment, the stock market, and other economic indicators have reached pre-recession levels. However, millions of low-income American families are still struggling to find stable, affordable housing.

According to a recent Zillow report, rents are up 52 percent nationally since 2000, while renters’ incomes have only increased 25 percent. More than half of households earning less than $30,000 a year spend half their income on rent, leaving little for other necessities such as food, medical care, transportation, or savings. There is simply not enough housing affordable to poor households.

Enacted in the early days of the economic crisis through the Housing and Economic Recovery Act of 2008, the Capital Magnet Fund (CMF) and the National Housing Trust Fund (NHTF) were specifically designed to increase America’s supply of affordable rental housing. The CMF in particular was created as a way for high-capacity organizations to attract investment into affordable housing and spur economic development in distressed communities. 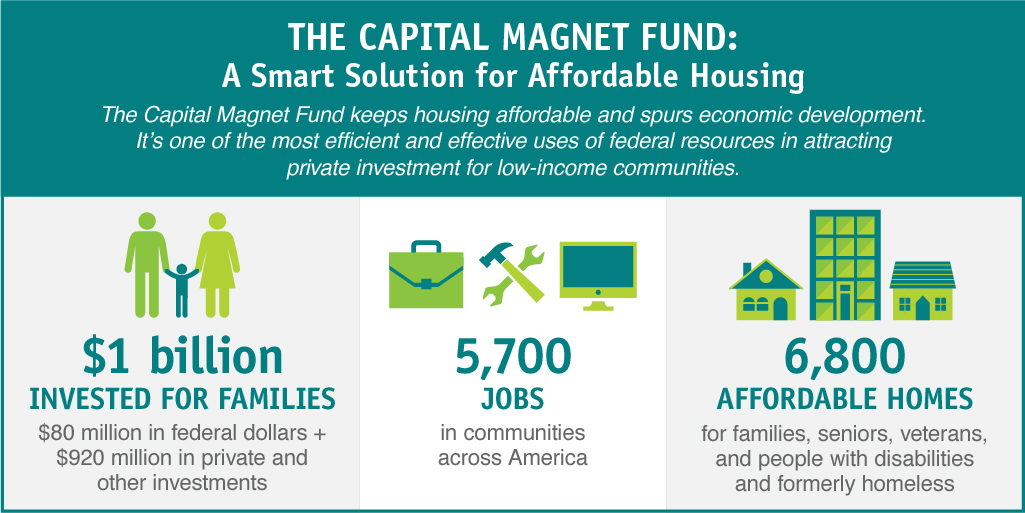 A Proven Track Record of Success
While the demand for affordable housing that led to the creation of CMF and NHTF intensified, payments to the programs were suspended when Fannie Mae and Freddie Mac were put into government conservatorship. But the one-time $80 million Congressional appropriation for the CDFI Fund with the Department of Treasury in 2010 enabled CMF and its grantees to clearly demonstrate the program’s effectiveness and impact.

Twenty-three organizations received the initial round of $80 million in CMF awards. With these funds, awardees attracted 12 times that amount for a total of more than $1 billion invested into communities—much of it from the private sector—creating nearly 7,000 affordable homes and 5,700 jobs in 28 states, Washington, D.C., and Puerto Rico (through July 2013). Among CMF’s other benefits are the following:

The CMF is an efficient use of federal resources and one of the most effective tools available to get private investment working to help address our nation’s housing challenges. It is leverage that works for the neediest families and America’s economy as a whole.