Elizabeth A. Duke, Board of Governors of the Federal Reserve System 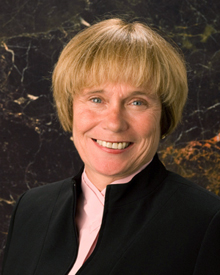 Community development today is a multidisciplinary exercise that challenges us to think holistically about how housing relates to jobs, educational opportunities, transportation, healthcare, and other services and amenities.

Elizabeth A. Duke took office as a member of the Board of Governors of the Federal Reserve System on August 5, 2008, to fill an unexpired term ending January 31, 2012. Prior to her appointment to the Board, Ms. Duke was Senior Executive Vice President and Chief Operating Officer of TowneBank, a Virginia based community bank. Prior to this, she was an Executive Vice President at Wachovia Bank, and an Executive Vice President at SouthTrust Bank. Earlier in her career, Ms. Duke was President and Chief Executive Officer of Bank of Tidewater, based in Virginia Beach, Virginia. Ms. Duke was the Chairman of the American Bankers Association from 2004 to 2005 and the President of the Virginia Bankers Association from 1999 to 2000. She served on the board of directors of the Federal Reserve Bank of Richmond from 1998 to 2000. Aside from her work in the banking industry, Ms. Duke has held many civic positions, including service on the boards of directors of the Virginia Council on Economic Education, the Hampton Roads Partnership, the Old Dominion University Foundation, and the Economics Club of Hampton Roads. She also served on the Virginia Legislative Subcommittee to Study Capital Access and Business Financing and served on the Board of Commissioners of the Norfolk Airport Authority. Ms. Duke received her bachelor’s degree from the University of North Carolina at Chapel Hill and her MBA from Old Dominion University. She received an honorary doctor of humane letters degree from Old Dominion University.

At one time, policy discussions revolved around whether community development was about people or places. I would argue that the debate is over and both sides won. Successful community development is based on attention to both the physical infrastructure, whether housing or commercial spaces, and the health and welfare of the residents therein. Safe and affordable housing will always be an important concern for lower-income Americans, but the recent recession and resulting damage to communities across the country make it clear that communities are more than physical structures…