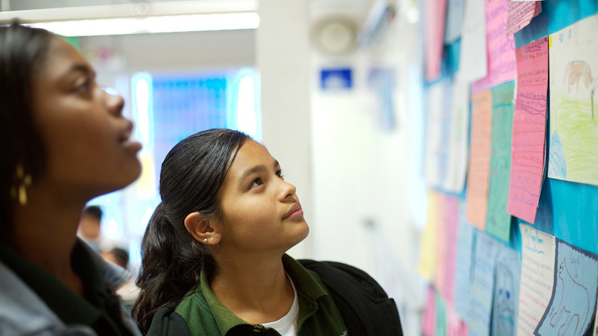 The quintessential promise of America is that through hard work, anyone born poor can succeed. The antipoverty movement grew out of recognition that this is a pipe dream for millions of people of color who are disproportionately saddled with failing schools, unemployment, poor health, and underinvested communities.

Those of us working to end poverty and racism used to make our case in moral terms: the nation must deliver on the promise of equal opportunity and shared prosperity because it is the right thing to do. But a demographic transformation more rapid and widespread than anyone had predicted has changed the conversation. By the middle of this century, the very same groups who have long been left behind will become America’s majority population. By the end of this decade, most youth will be people of color. These shifts already have occurred in California, Texas, New Mexico, and in metropolitan regions across the country. Equity—just and fair inclusion in a society in which all can participate and prosper—has become more than a moral issue. It is now an economic imperative.

We cannot afford to squander the talents and potential of so large a segment of our population. Yet we continue to do exactly that. The economic disaster beginning in 2008 hit communities of color first and worst, even as it also hurt many poor, working-class, and middle-class whites. In 2010, 27.4 percent of African Americans, 26.6 percent of Hispanics, 12.1 percent of Asians, and 9.9 percent of whites were poor.1 More than one-fifth of the nation’s children lived in poverty, the worst track record in the developed world. The reality in communities of color was even more abysmal: 38 percent of black children and 35 percent of Hispanic children were poor.2

How America produces such disparities is no mystery. Address is a proxy for opportunity. Where we live determines whether or not we have access to the requisite resources for success, including good schools, decently paid jobs, and transportation that connects to employment centers. It determines whether or not we have access to healthy living conditions—whether the air is reasonably clean or fouled by pollutants spewing from a freeway or rail line or bus depot in the neighborhood; whether we are likely to develop a long list of chronic illnesses and, if we do, whether we will survive them; whether we are likely to be killed during a crime, in a car crash, or simply when crossing the street. Any serious discussion of poverty inevitably turns to prevention and well-being—and that brings the conversation straight into the places where struggling people live.

However, we must not view these places simply as constructs of geography. In a nation where neighborhoods remain largely segregated by skin color and ethnicity, “place” can be understood only through the lens of race. Efforts to improve conditions in low-income communities must address the systemic barriers to success and well-being—many of them erected on the structures of racism—that lie at the root of economic and social inequity.

Poverty is tied to educational attainment, and student outcomes reflect the effects of underinvestment. By the end of fourth grade, black and Hispanic students and poor students of all races trail two years behind their wealthier, predominantly white peers in reading and math. By eighth grade, the gap is three years; by 12th grade, it is four years.3 Six of every 10 African American, Hispanic, and Native American students graduate high school, compared with eight in 10 white students and nine in 10 Asian and Pacific Islander students.4 Nearly six million people ages 16–24 disproportionately young people of color—neither work nor attend school.5

The growing legion of disconnected youth forecasts bleak outcomes in terms of social stability and economic prospects for the youth themselves, for their families, for their communities, and for society at large. Youth without productive activities, options, or hope are more likely to be poor for the rest of their lives. They also are more likely to end up in the criminal justice system, leaving them with a stigma that will limit opportunities long after their release and imposing huge social and financial costs on all of us. The need for bold, comprehensive strategies to reverse this trajectory and open up possibilities for the young people who are America’s future has never been more urgent. Policy change is key: policy created many of our problems, and it must advance and support solutions.

It is neither by accident nor by the force of the free market that society’s most vulnerable groups generally live in its most distressed places, neighborhoods stripped of decently paid jobs and of investment in the infrastructure that fosters opportunity. In other words, poor people of color do not move into disinvested communities because that’s all they can afford; rather, investment disappears when people of color move in. Neighborhoods and regions across the country bear the scars of government policies, real estate practices, and business strategies through much of the twentieth century that prevented African Americans and other targeted groups from obtaining loans or participating in government-sponsored housing programs while encouraging white residents to move to the ever-distant suburban edge.

While federal and state laws prohibit many overtly discriminatory policies, the nation’s map remains carved into separate, shamefully unequal societies. More than half of Hispanics and nearly 65 percent of African Americans live in neighborhoods of color,6 generally low-income ones. Two-thirds of black children live in high-poverty communities, compared with only 6 percent of white children—a percentage that has not changed in 30 years.7

Neighborhoods are working hard to address their challenges, often without policy support. In many of these communities, nonprofit organizations, places of worship, and residents come together to administer programs and services to help people in need and to provide venues for engagement with the issues they face. But in the absence of equity-driven policies and investments, programs struggle in isolation, grinding away for funding, recognition, and priority in reform agendas. Policies set the rules and parameters for all the factors that affect community conditions and shape the lives of residents, from the types and locations of new schools, jobs, and services to the availability of fresh, nutritious foods and other health resources to the quality of teachers, the educational standards, and the physical state of school buildings.

Years of antipoverty work have revealed two things: community interventions achieve their greatest success when they are connected to policy, and policy solutions are most effective when they draw from what is working in communities.

These lessons lie at the heart of an equity agenda, which seeks to transform high-poverty communities into high-opportunity communities—places that provide all the resources people need to thrive, including employment, job training, good schools, safe streets, parks, healthy food retailers, transportation, and affordable high-quality housing. A successful equity agenda builds upon the wisdom, voice, and experience of local residents. It focuses on empowering people while strengthening the places where they live.

Research shows that communities, cities, and regions that pay attention to equity grow stronger, and that the effects of an equity agenda may be most pronounced in areas that have struggled most. If the nation is to have a bright future, the equity agenda must become America’s agenda, and it must drive anti-poverty efforts. We can no longer stop at a singular economic or community development strategy; however worthy, it will prove insufficient to address growing inequality and increasing poverty at the necessary scale. Rather, we need to think differently about how broad policy agendas and legislation can incorporate equity-focused solutions that work. And we need robust alliances across fields—civil rights, environmental justice, education, health, community organizing, education, and economic development— to fight for investments to create communities of opportunity everywhere, and for all.

It is a big task, but it need not be daunting. Four principles can guide work to advance equity in tangible ways:

Focus on those left behind. By using data and community engagement, advocates and community developers can understand the structures and symptoms of exclusion. This is a good starting point for developing strategies, prioritizing outcomes, and measuring progress based on how effectively an initiative reaches the people who have been left behind.

Grow new businesses and new jobs. Small businesses employ half of all private-sector workers and create two out of every three jobs in this country. They also incubate many of the new innovations that contribute to growth. Enterprise development efforts can link local entrepreneurs to the larger-scale markets, financing sources, and growth strategies that are critical for long-term success.

Prepare workers for the jobs of tomorrow. Human capital was the key to national prosperity in the Industrial Era, and it will be even more important for competing effectively in this century. Education and workforce development systems must be retooled to equip the workers of tomorrow—and today—with the skills to succeed in an ever-changing, globalized, knowledge-based economy.

Angela Glover Blackwell founded PolicyLink in 1999 and continues to drive its mission of advancing economic and social equity. Under Blackwell’s leadership, PolicyLink has become a leading voice in the movement to use public policy to improve access and opportunity for all low-income people and communities of color... Read more