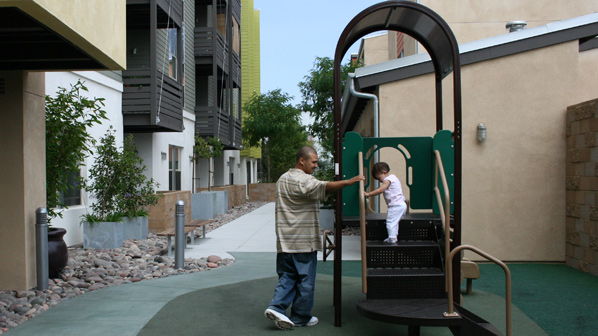 Community development has traditionally focused on investments in housing, commercial revitalization, and physical improvements. Although all three are clearly critical to communities, the field has largely ignored (or paid too little attention to) one of the key factors that shape the quality of the everyday life: public safety.

Yet there is growing evidence that families care a great deal about safety and prioritize it above many other community attributes. Concern about safety and crime was one of the main reasons why families participating in the Moving to Opportunity (MTO) demonstration program accepted the option to move out of their high-poverty neighborhoods. Moreover, participating families who received vouchers and assistance to move to lower-poverty environments relocated to safer neighborhoods. At the outset of the study, nearly half of all of the participating households in Boston reported feeling unsafe or very unsafe. Among those offered vouchers to move to lower poverty areas, that share fell to only 24 percent several years later.1 (Crime was falling during this period, so control group members who received no mobility assistance also reported feeling more safe in their neighborhoods at the time of the follow-up survey; however, the improvement for these individuals was far smaller.)

A recent New York University study of 91 cities found suggestive evidence that housing voucher holders weighted crime and safety more heavily than poverty levels when choosing a neighborhood in which to live.2 As of 2000, the average voucher household lived in a significantly lower-crime neighborhood than the average tenant participating in the Low Income Housing Tax Credit program, although members of both sets lived in communities with nearly identical poverty rates and minority population shares. In other words, individuals with greater residential choice—that is, voucher recipients—chose to live in neighborhoods with markedly lower crime rates but not lower poverty rates or different racial compositions.

Recent research shows that families have good reason to worry about the safety of their environment. Most directly, people who live in high-crime neighborhoods are more likely to be victims of crime. In addition, there is strong evidence to indicate that such unsafe environments affect families and children in other ways. People who live in high-crime environments are more likely to witness a violent crime or know someone who has been victimized; this can profoundly shape one’s outlook on the world and level of ambition. Fear of crime can lead individuals to withdraw from their communities and live more sheltered and isolated lives. Finally, a growing number of studies are finding that exposure to crime, and especially violence, can heighten stress in children and lead to lower cognitive test scores and diminished performance in school.3

In addition to causing fear and stress, which can shape individual outcomes, crime may also profoundly affect the social structures of communities through high levels of incarceration. In neighborhoods where violence and crime are particularly prevalent, incarceration removes large numbers of young adults—fathers, in particular—from the community, disrupting social networks, breaking up families, and weakening local institutions.4

In short, the evidence is strong that community development practitioners should increase the attention paid to safety and crime. The more difficult question, of course, is how: what tools do community development practitioners and policymakers have to fight crime? Most obviously, they can and should work with law enforcement to ensure that police are responsive to local calls and maintain a presence in problem areas. In addition, there are at least three other strategies community development practitioners and policymakers might adopt. The first and perhaps easiest is to combat physical blight. The “broken windows” theory of George Kelling and James Q. Wilson argues that signs of physical disorder, such as uncollected garbage, graffiti, and broken windows, signal to potential offenders that local residents are not invested in the community and would be unlikely to intervene in or report any crime.5 Although few studies have been able to pinpoint the direction of causality, there is strong evidence that physical disorder is at least associated with higher levels of crime; thus, community members should act quickly to address such signs of disorder.

A second and arguably more fundamental approach is to develop the collective efficacy of a community, which is the willingness of residents to monitor public spaces, intervene when those spaces are threatened, and help neighbors in need. Robert Sampson and his colleagues showed that collective efficacy is highly predictive of crime, and they argue that building collective efficacy is far more important to controlling crime than fixing signs of physical blight.6 Their study recommends strategies to organize community residents and encourage collective work on social control. A partnership with local law enforcement may be useful when implementing this strategy, but the residents of a community must drive this effort.

Finally, while impacts of such programs have not yet been rigorously evaluated, community courts such as the Red Hook Community Justice Center in Brooklyn appear to be a promising way to engage communities and address low-level crime.7 These courts bring the justice system closer to citizens and aim to make it more responsive to everyday concerns. Community residents are involved in identifying public safety concerns and priorities, and they help to determine community service assignments for convicted offenders that both reconnect these individuals tothe community and help to address neighborhood problems. Many community courts also house a variety of social service programs (such as job training and placement, drug treatment, and tutoring) to address the root causes of criminal behavior. Although each community court employs a different approach, they all seek to promptly administer punishments for nonserious offenses that can serve to benefit the community, provide services to address some of the root problems that contribute to crime, and forge meaningful partnerships with the neighborhoods they serve.

We are only just beginning to understand the costs that crime—and fear of crime—can impose on communities and their residents. Crime can lead to social isolation, encourage unhealthy behaviors by changing perceived risks, and heighten stress levels. Such elevated stress may make it difficult for children to focus in school and to learn, and in the long-run it may compromise their immune systems and increase vulnerability to disease. The latest findings from the MTO demonstration indicate that providing an opportunity for very poor families to move to neighborhoods with lower levels of poverty can lead to improvements in physical and mental health.8 Although the mechanism of this effect is unclear, the opportunity to live in a safer neighborhood may be the critical ingredient in ending the cycle of poverty for many families.

Ingrid Gould Ellen is professor of urban planning and public policy at New York University’s Wagner Graduate School of Public Service and co-director of the Furman Center for Real Estate and Urban Policy. Before coming to NYU, Professor Ellen held visiting positions at the Urban Institute and the Brookings Institution... Read more