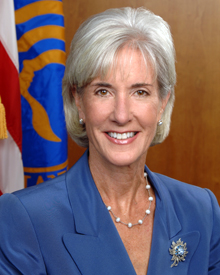 Kathleen Sebelius was sworn in as the 21st Secretary of the Department of Health and Human Services (HHS) on April 28, 2009. Since taking office, Secretary Sebelius has led ambitious efforts to improve America’s health and enhance the delivery of human services to some of the nation’s most vulnerable populations, including young children, those with disabilities, and the elderly. As part of the historic Affordable Care Act, she is implementing reforms that have ended many of the insurance industry’s worst abuses and will help 34 million uninsured Americans get health coverage. She is also working with doctors, nurses, hospital leaders, employers, and patients to slow the growth in health care costs through better care and better health. Under Secretary Sebelius’s leadership, HHS is committed to innovation, from promoting public- private collaboration to bring life-saving medicines to market, to building a 21st century food safety system that prevents outbreaks before they occur, to collaborating with the Department of Education, to help states increase the quality of early childhood education programs, and give parents more information to make the best choices for their children. Secretary Sebelius served as Governor of Kansas from 2003 until her Cabinet appointment in April, 2009, and was named one of America’s Top Five Governors by Time magazine.