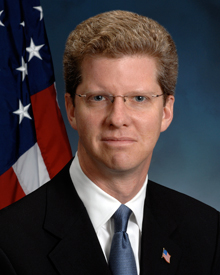 Shaun Donovan was sworn in as the 15th U.S. Secretary for Housing and Urban Development on January 26, 2009. He has devoted his career to ensuring access to safe, decent, and affordable housing, and has continued that effort in the Obama administration. Secretary Donovan believes that America’s homes are the foundation for family, safe neighborhoods, good schools, and job creation. His tenure as HUD Secretary has reflected his commitment to making quality housing possible for every American. Sworn in at a time when the foreclosure crisis had devastated American families, under Secretary Donovan’s leadership HUD has helped stabilize the housing market and worked to keep responsible families in their homes. The agency has instituted reforms that have solidified the Federal Housing Administration’s financial position and protected the taxpayer against risk, while still preserving FHA’s mission of providing responsible access to homeownership. Prior to HUD, Secretary Donovan served as commissioner of the New York City Department of Housing Preservation and Development. Secretary Donovan previously served in the Clinton administration as Deputy Assistant Secretary for Multifamily Housing at HUD, where he was the primary federal official responsible for privately-owned multifamily housing. He also served as acting FHA Commissioner during the Clinton/Bush presidential transition. Prior to his first service at HUD, he worked at the Community Preservation Corporation (CPC) in New York City, a nonprofit lender and developer of affordable housing. He also researched and wrote about housing policy at the Joint Center for Housing Studies at Harvard University and worked as an architect. Secretary Donovan holds a BA and masters’ degrees in public administration and Architecture from Harvard.